This is a text widget, which allows you to add text or HTML to your sidebar. You can use them to display text, links, images, HTML, or a combination of these. Edit them in the Widget section of the Customizer.

When considering the next part of the course, my archive of knitwear at home was the obvious choice. Knitwear being a subject I am both passionate about and as a result, of which I have quite an extensive knowledge.

I have amassed overtime both knitwear given to or made for me and knitwear made by me.

Knitwear often tells a story. Items of clothing or blankets – Heirlooms – that have been handed down through generations of a family, who have worn them, who have made them. Stitches, hand made, still existing when the maker may have long gone.

A primary school tea towel. A piece of history documenting hand drawn portraits and the names of all the children and staff at a school at a given point in time. In this case summer 2016. A time capsule. A moment in time. A memory for a school full of children. A memory of a time at home with young children, for a parent.

A modern day fabric design that is reminiscent of a curtain fabric from a childhood.

When considering Scandinavian knitting designs, the Selbu mitten whose origin is attributed to a girl Marit Emstad who wore mittens to a church service in 1857, the original pattern of which, (a vertical column of two snowflakes on the front side of the mitten) tells the story its now attributed to. 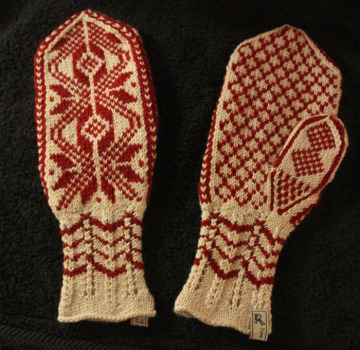 Mittens became popular locally, with attempts to out do one another with beautiful design variations. Daily life being one of many influences on their pattern designs.

The Selbu mitten is a masterpiece and at one time was even a form of currency, being held in such high regard.

Norwegian fishermen and sailors were great knitters, their ropes and anchors translated into cable patterns incorporated into their knitted garments – telling us something of their lives.

The Story of the Selbu Mitten – Selbuvotten